Pointing Out A Presence in the Landscape: A Commemorative Milestone Between Chile and Argentina

Pointing Out A Presence in the Landscape: A Commemorative Milestone Between Chile and Argentina 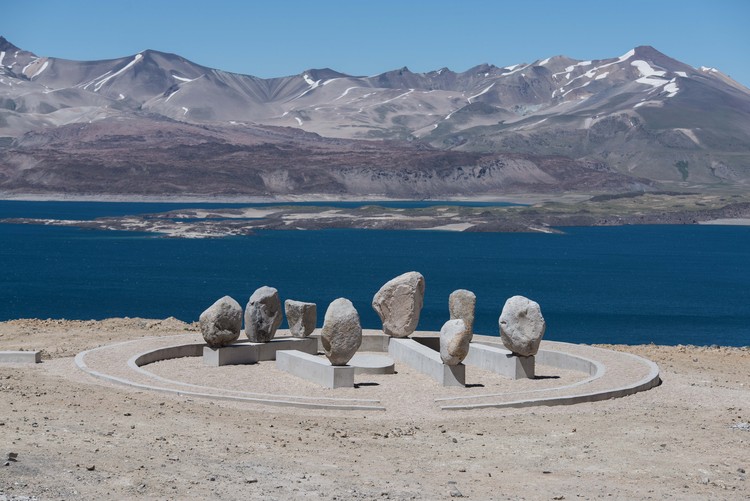 A project for the Commemorative Landmark Pehuenche Commission carried out by the recently graduated Chilean architect Antonia Ossa, is part of the series of small-scale interventions built in the Andean sector of the Maule Region, Chile, as part of the certification process of the School of Architecture of the University of Talca.

According to Ossa, this sculptural work would seek to link the provinces of Talca and Malargüe in order to strengthen ties and thus favor dialogue between both towns and their common legacy.

Located in front of Maule Lake in San Clemente, the project is constructively and formally conditioned by the situation of isolation in which it is located and by the landscape of the high mountain that surrounds it. The milestone is made up of three types of elements; a reinforced concrete ramp, four plinths in the same material and eight granite stones whose weights range between 2 and 4 tons.

While the ramp aims to save the slope and thus give it a sense of continuity, the stones that rise above it seek to emulate the gesture of the material and immaterial legacy of the original inhabitants of the area, who used the verticality of the sculpted granite to indicate its presence in the territory. Understanding the multiplicity of layers of history that coexist in the area, its author Antonia Ossa sought advice from various specialists; among them a historian, a geologist and a sculptor. From the collaborative and interdisciplinary dialogue, the project builds a conversation between memory and the present, as well as between the landscape and the elements that compose it.

Thought as a public space with minimal impact but with high tourist potential, the Commemorative Landmark has contributed to the consolidation of the imagery of the Laguna del Maule since its inauguration in 2019. “The climatic conditions were decisive for the execution of the project”, indicates Antonia Ossa, who relates that the construction was carried out intermittently between the months of April and November 2018.

Selected as one of the four winners of the 2020 Young Talent Architecture Award, this commemorative landmark is part of the project “Three places to inhabit the mountain range in the Maule region”, presented alongside Pia Montero’s The Landscape Reconversion of the San Pedro Hot Springs.

The idea that shapes the project is a conversation. My current intention is to listen, talk, articulate project requirements and generate ideas and different compositions for a specific problem. But today’s requirements are different from those of past generations, for example, we are more concerned with the impact of our projects on the environment.