The History of Kitchens: From the Great Banquets to the Built-in Furniture

The History of Kitchens: From the Great Banquets to the Built-in Furniture

The discovery of fire was one of the great events that changed the social organization of human agglomerations, which gradually passed from nomadic to sedentary lifestyle. Fire, which in that context served to keep people warm and protect the group, was also being explored as a source for cooking food, which not only changed human eating habits, but also made it possible to conserve food, changing the social organization of communities. The preparation and meals were collective acts, which brought people together to feed, warm up and protect themselves. It is from this habit that we inherited the practice of large banquets and the appreciation of food and meal times. Food preparation, on the other hand, was gradually marginalized.

While the Egyptians, Assyrians, Phoenicians, Persians, Greeks and Romans shared the habit of holding large banquets, the preparation gained less and less prestige, losing its collective social dimension until it was physically segregated in a specific room: the kitchen. 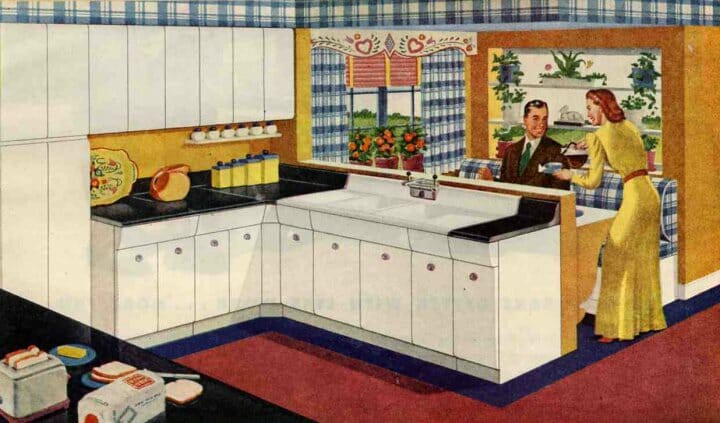 The first record of a space for handling and preparing food is from Ancient Egypt, a society that not only invented beer, but had the habit of making bread and cakes on wood stoves inside homes. In Ancient Greece, the swelling of the aristocratic strata led to meals becoming a great social experience, treated almost as art. They were prepared in kitchens that were attached to the houses, in patios that were often uncovered. In the richest homes, the kitchen was indoors, so that the heat from the stove also warmed the environment, while there was a small room next to the kitchen where food was stored. Already during the Roman Empire the banquets became more and more luxurious and bountiful for the richest. The Roman population, in general, did not have kitchens in their homes – they used collective kitchens that were located in the center of the cities to prepare meals.

In general, in antiquity, although meals were always celebrated as great events of abundance, the preparation spaces were defined based on the management of fire and smoke. For a long time there was no efficient exhaust technology to deal with this problem, therefore, the preparation spaces were segregated from the banquets, being in charge of servants or enslaved people. From the ideological domain of the Catholic Church and the dissemination of the doctrine of capital sins, gluttony, as well as the social interaction that came from the great banquets, became an object of censorship by the clerical authorities, making the habit of using collective kitchens and having large meals abandoned, little by little.

Unlike bathrooms, which at that time became non-existent for most of the population, cooking spaces were adapted into people’s homes. Basically composed of a stove on the floor and a hanging bucket that were positioned in the center of the room, it was right there where the animals were slaughtered, prepared, and also where other supplies were stored. At a time when hygiene was also censored by Catholic morality, houses became dirty places and spread pests, which was aggravated by the lack of sewage networks. The unhealthy situation only pushed people further away from cooking activities, cooperating to segregate the place and its workers from the rest of social life.

Throughout the 19th century, great inventions changed the way kitchens are organized; with the advent of the chimney, this space became independent. Later, the iron stove, the possibility of piped gas, and the first refrigerators circumstantially changed the spatial configurations. Since the Industrial Revolution, the kitchen, understood as a workspace, started to be seen from the perspective of production lines and became the object of experiments that sought to optimize its processes.

At the beginning of the 20th century, women, linked to work in the kitchen since the medieval age, began to study the optimization of these spaces. In the United States, Christine Fredericks Mary Pattison carried out a study of circulation in the kitchen in 1922 and examined the movement based on the arrangement of furniture, concluding that the layout was fundamental for optimizing time. In 1926, in Germany, the architect Margarete Schütte Lihotzky developed the concept of the Frankfurt Kitchen inspired by the kitchens of German warships.

There, the built-in kitchen and the organization that seems most familiar to us today appeared. With the advent of the electrical network, kitchens were being equipped with objects and appliances that sought to save time and facilitate everyday life. In the following decades, structuring social changes impacted the way the kitchen is integrated into domestic life; it took up less space and was definitely brought into the house. It could still be run by cooks and maids, but it had become a domestic space, including design and decoration elements. During the Cold War, in the United States, kitchen appliances for the middle class were great symbols of the American Way of Life.

The last major change we are witnessing in kitchens is a revival of food processes as a social and collective activity. In the 21st century, the compact kitchen was integrated into social spaces from what people know today as “open floor plan”. It is important to point out, however, that most of the changes that have taken place in 19th century kitchens until today have focused on a specific social group, the upper middle class. Even today, we see unhealthy kitchens, without structure and sanitation and, mainly, entire groups that are in a situation of food insecurity. If, on the one hand, we seek to rescue the social and cultural function of food and meal preparation, on the other hand, the kitchen has become even more a luxurious space, far from the reality of many.